Basic facts about WLAN standards in North America and Europe

Have you ever wondered why different WLAN devices which are each compatible with the 802.11ac standard support nevertheless different data rates. Well I wrote this article to give an answer to this question. To do this it is the best to start with the beginning of WLANs.

The beginning of WLAN technology

A WLAN is an IEEE normed radio transmission technique that is used for data transmissions.

Since 1999 WLAN practically exists in Europe and America. The first standard which could establish at both markets has been the IEEE 802.11b with a data rate of 11 Mbit/s at the 2.4 GHz spectrum.

The transmission at the 2.4 GHz spectrum has the advantage of a relative good receive and transmission distance.

However there some disadvantages at the 2.4 GHz spectrum.

The usage of the 5 GHz spectrum

Already the IEEE 802.11a standard of the year 1999 has normed the transmission at the interference reduced 5 GHz spectrum. But first at the year 2003 this standard has been harmonized for the European market with the introduction of the IEEE 802.11h standard. In Europe the 5 GHz is primary used by weather radar of the Air Traffic Control (ATC). For that kind of reason a transmission control mechanism is statutory for the secondary usage of this spectrum. These control mechanisms are the “Transmit Power Control” (TPC) and the “Dynamic Frequency Selection” (DFS).

TPC is primary used to reduce the radio interferences and gains a plus to the battery runtime on mobile devices.

The “Dynamic Frequency Selection” (DFS) is a technique by which an automatic channel change is initiated, as soon as an extraneous sender will be detected at this channel. With that technique interferences to the weather radar by WLANs should be avoided. In Europe the DFS must be implemented and used if a WLAN uses one of the channels 52 – 64 or 100 – 140. (See drawing: WLAN channels in North America and Europe) Many wireless router manufacturers for small office and home office (SoHo) do not implement DFS and therefore these routers are not allowed to use these restricted channels. This reduces the amount of the channels within the 5GHz spectrum for many home and small office users to the following channels (36 – 48 and 149-165 (only USA/Canada)).

In normal business people are not making any difference between the standard IEEE 802.11a and IEEE 802.11h. 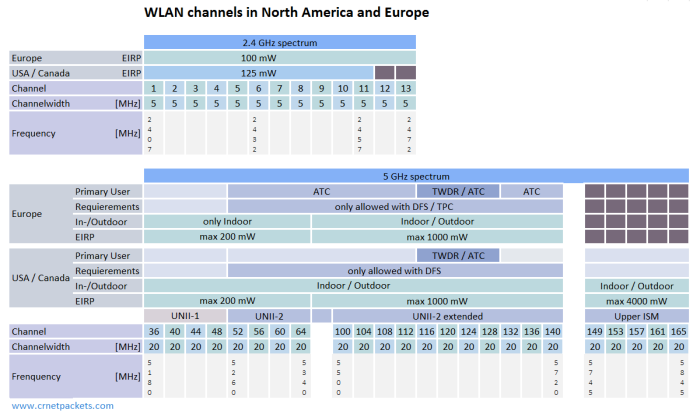 In the year 2004 the authentication techniques WPA and WPA2 were being introduced by the adoption of the IEEE 802.11i standard.

The authentication methods WPA and WPA2 can be both used with the encryption techniques TKIP and AES-CCMP.

But the most common configurations are

Since 2009 the transmission standard IEEE 802.11n exists. With this standard gross data rates up to 600 Mbit/s has been defined. The standard describes transmissions at the 2.4 GHz spectrum and also at the 5GHz spectrum. Furthermore the channel width would be more flexible. Now channel widths with 20 or 40 MHz are possible and allowed by the specification at the 2.4 GHz band and as even at the 5 GHz band.

In a densely populated areas it is mostly not recommend to deploy 40 MHz channels at 2.4GHz due to massive interferences. And also not every Access Point does provide a configuration of a 40 MHz channel.

Beside of this a new technique called “spatial streams” were introduced. “Spatial streams” are a kind of link aggregation. This is implemented by the use of the so called MIMO (Multiple Input Multiple Output) technique. That means for practical usage every antenna can transmit/receive a specific data rate. By the use of the MIMO technique it is possible to combine 4 antennas into one connection . So that theoretical a 4 time higher data rate is possible (See drawing: Gross data rates). How many “spatial streams” would be used by a specific transmission, is toggled by that device of the connection which supports the lowest numbers of “spatial streams”. Due to the physical characteristics of this technique the throughput is higher in areas with a lot of reflections than in areas with fewer reflections.

Also beamforming technique has been introduced by the IEEE 802.11n standard. This technique emulates electronically a directional antenna.

In December 2013 the standard IEEE 802.11ac has been adopted. This standard is also known as “Gigabit WLAN”, because with this standard are gross data rates of more than 1 GBit/s are possible. At the moment the most devices are optimizing only more or less the techniques which have been originally introduced by the earlier standards. For example they have higher rates on a single spatial stream. This is also known as IEEE 802.11ac wave 1.

Nevertheless many manufacturer are working at the implementation of the “Multi User MIMO (MU-MIMO)” at this moment and the first devices have been presented to the audience. These new devices are also known as IEEE 802.11ac wave 2 devices. With this technique parallel streams to more than one device at the same time should be possible. For example two parallel streams, each with 200 Mbit/s would then be possible. This sounds at the first hearing not quite fantastic. But indeed it is fantastic, because it would be able to have more than one collision domain in one WLAN. This is comparable with the change from the HUBs to the Switches at the Ethernet LAN, which also improved the network performance a lot.

Gross data rates at the WLAN