Posted on 24. April 2017 by Christian Reusch Leave a comment

Today I will start a small series, which will cover some basic behaviour of the IPv4 protocol suite and is meant for reimagine and a little bit baselining.

I will start the series with the Dynamic Host Confirguration Protocol (DHCP).

In the Classless Inter Domain Routing (CIDR) environment of IPv4 the following parameters should be defined on every IPv4 host:

And of course some additional infos like ntp-servers or DNS-Servers should be defined, too. If you want to adminstrate this in a network with more then 1 host, you normally would need a good pair of running shoes.

So for this kind of reason it would be nice to have a workflow which allows us to configure our hosts centralized and dynamically.

In 1985 this worklfow is defined in the RFC 951  with the invention of the Bootstrap–Protocol (BOOTP).

The idea behind BOOTP has been a client which boots without a non volatile storage gets his configuration during the boot process over the network.
but there is mainly one reason why an update for the BOOTP is needed.

The address assignment happen in 4 steps 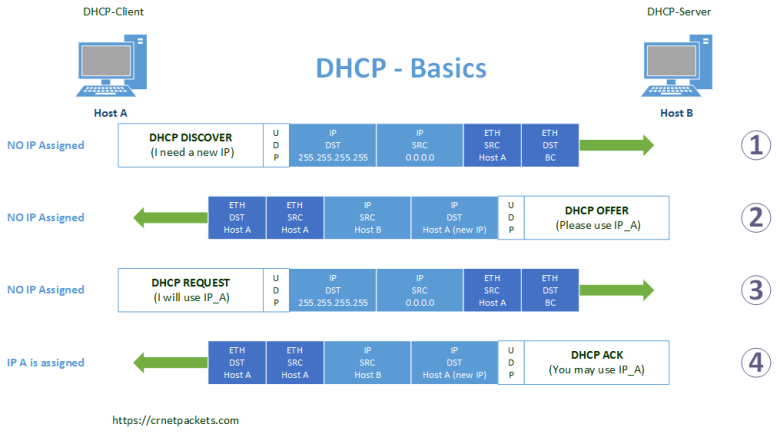 Inside the Address DHCP OFFER and the DHCP ACK message a so called renewal time is defined. After this time the client needs to renewal his address by the DHCP address renewal.
This is done in 2 Steps.